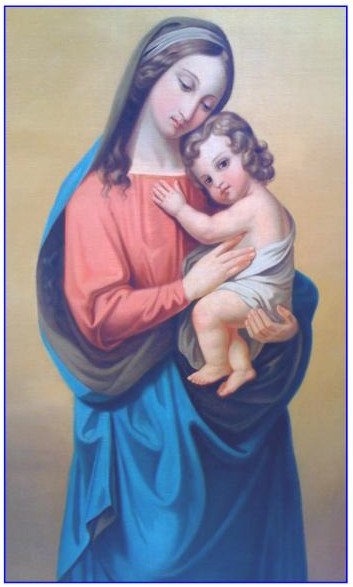 Our Lady of Charity

This title of our Lady aptly describes those who belong to this Parish Community.  By tradition, Our Lady of Charity is always pictured holding the infant Jesus in her arms.  By such, she is both Mother and Protector of her very Son.  The members of Our Lady of Charity Parish constantly seek the intercession of their Patroness of Charity.

A brief history of Our Lady of Charity Parish

Our Lady of Charity Parish is located on 13 acres in Western Delaware Country, Pennsylvania, within the Borough of Brookhaven.  Our property borders and includes the Boroughs of Parkside and Upland, as well as portions of Chester and Middletown Townships.  The Parish was founded by Archbishop John O’Hara, C.S.C., Archbishop of Philadelphia, on November 10, 1952 in response to the growing population of Catholics in the area following World War II.  Our Parish was split from St. Robert Parish, Chester. (now called, St. Katherine Drexel.)

The founding pastor was Reverend Ignatius F. Bash, (1952-1954) who because of sickness, only served two years as pastor, but within those short years, was able to endear his new parishioners and construct plans for the church, school and convent buildings.  Father Bash broke ground for the new Parish building on September 21, 1953, and construction began thereafter.  Sadly, Father Bash died on February 27, 1954 and he did not see the fruits of his work.  But God always provides.  His predecessor, the Reverend John P. Kiniry was a very fine pastor, astute in business and planning, and was responsible for the excellent physical plant that is enjoyed today.  There are still many in the parish who recall these two fine priests and those exciting days of our beginning.

The First Mass for the newly formed Parish was offered in Upland at the Civic Club on November 30, 1952.  On the same day, Mass was also offered at the Parkside Firehouse and continued every Sunday thereafter.  In those early days, six Masses were scheduled every weekend, two in Upland and four in Parkside, for the worship of the newly formed parish and her parishioners. Daily Mass was celebrated in the Chapel of the Rectory, which then was located on Forestview Road, Parkside.  On May 1, 1953, the present site of our property was purchased from the Upland School District for $40,000.

Now it’s over sixty years later and Our Lady of Charity continues to serve Catholics in our area.  The Reverend Brian A. Izzo serves as the present and sixth pastor.

Former Pastors of Our Lady of Charity Parish

May they rest from the good labors, for their good deeds go with them.  Rest in Peace, Fathers

Our Lady of Charity

Confession
Saturdays: 3:15 to 3:45 pm
and other times by appointment